Walking through Brunswick South Primary School, you may feel transported half way across the world. Children heading to class greet their teachers with a “buongiorno” instead of a “good morning”.

A group of Grade 5 and 6 students begin the day with a geometry lesson, learning their way around a protractor in Italian.

As of 2017, Brunswick South Primary School has become the first Italian bilingual school in Victoria, and the first Victorian school in 20 years to realise a new bilingual program.

The unique learning model adopted by the school provides students with the opportunity to be educated in not one, but two languages, and to be exposed to another culture at a young age.

School principal, Sheryl Hall, pioneered the introduction of the program after discovering the myriad benefits of bilingual learning, from stimulating brain development to enhancing memory and concentration.

Though the bilingual program was officially launched this year, it has been gradually implemented since 2012, and now allows students from Prep to Grade 6 to engage in the Italian language for 50 per cent of their class time.

In December 2015, state funding to sustain the bilingual program was announced, with the government allocating $100,000 towards its development.

Deputy Premier of Victoria and Minister for Education, James Merlino, has been an advocate of the project since its inception.

Mr Merlino, of Aeolian heritage, was today recognised by the Italian Republic, receiving the Order of the Star of Italy, for his collaboration in the project.

“This is a truly humbling experience and it is something that I will treasure forever,” he said.

“I have always had a proud connection to my Italian heritage and it’s wonderful to be engaged with the Italian community.”

Before students and teachers, Mr Merlino was presented with the award by the Italian Consul General for Victoria and Tasmania, Marco Maria Cerbo.

“Mr Merlino has been active in many fields throughout his career, but he has never forgotten his roots,” Mr Cerbo said.

“He truly deserves to become a cavaliere because his results are tangible; we are awarding a prize to a person who delivered a result that we can see.”

The success of the bilingual program was largely due to the tireless work of both Mr Merlino and Mr Cerbo, along with Ms Hall and a group of parents who pushed for the project to come to fruition.

School Council President Gabrielle Marchetti and Donatella De Palma were two of the founding members of a committee which was formed in 2008 to lobby for an Italian bilingual school in Victoria.

“We all spoke Italian to our children at home and we really wanted to send them to a bilingual school so that their Italian would continue to develop,” Ms Marchetti said.

“We were dismayed to find that there were lots of bilingual schools in Victoria but none in Italian, even though it is the second most widely spoken language in Australia.”

Eight years and many meetings later, the team of dedicated parents have witnessed their vision become a reality.

“This was our little dream and I’m so glad that we’ve made it happen,” Ms De Palma said.

Lorenza Bini is relatively new to Australia, having migrated from Italy 10 years ago, and is excited to send her son to a bilingual school so that he can engage with his heritage on a daily basis.

“Language also means culture, and I think it’s important for our children to have an understanding of the culture that they come from,” Ms Bini said.

While Ms Bini’s story is not isolated, the vast majority of students at Brunswick South Primary School do not have Italian heritage, and did not have an established knowledge of the Italian language before attending the school.

Out of the 340 students at the school, around 30 have Italian background, proving that Brunswick South Primary School is an inclusive environment which is just as successful in its unique bilingual program with students already familiar with Italian culture, as it is with those who have been introduced to something worlds apart from what they know. Marcello D’Amico is exhibiting his art in Montmorency. Picture: Kylie Else.

THE beauty and mystique of women is captured in the latest exhibition of works from award-winning Watsonia artist Marcello D’Amico.

Almost all of the 73-year-old artist’s drawings, paintings, watercolours, ceramics, sculptures and poems celebrate the beauty of the female form.

“I’ve tried to bring out the essence, femininity and sensuality of the figure by focusing on female bodies of all ages, creating an illusion that the viewer is admiring a woman in her own private environment, without pretences and artificiality,” D’Amico said.

“I do not intend to detract from various representations of woman, but wish society to see her in all her forms, rather than a single stereotype.”

D’Amico, who has been married to Pauline for 43 years, said he was “dedicated to women” and his exhibition was a mini-retrospective of his life. “Women are very inspiring,” he said. “I don’t even talk about equality because it shouldn’t be an issue.”

Italian-born D’Amico has also incorporated the colours of his birthplace into his “female landscapes”.  “Even though my work is mainly inspired by my birthplace — the Aeolian Islands — I consider my works universal and they are aimed at a universal audience,” he said.

“The volcano Stromboli, on the island where I lived for three years in the small village of Ginostra, left an indelible impression on me. The palette of red, yellow and blue is strongly influenced by the fiery outbursts that were part of my everyday experiences. The sensuality of women … is embraced in my coloured drawings where they feel, and are, free.”

The Voyages of the Boy From Ginostra is at Busybird Studio Gallery, 2/118 Para Rd, Montmorency, from April 12 to May 10. 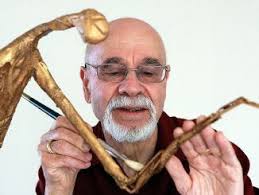 L’incendio in Lami from Biagio Famularo on Vimeo.